Just what is a Priory library book then?

The most common question arising about the Durham Priory Library digitisation project is “So how many books are you digitising?” and my response always starts with “roughly …”. There are several reasons for this. One of the largest books, the Bible of Hugh of Puiset, shelfmark DCL MS A.II.1 is, in spite of that shelfmark, not one but four of the largest volumes in the project. Two of the incunables, in spite of having shelfmarks Inc.26 and Inc.40 are bound in a single volume (this bizarre decision always leads to a moment of panic when fetching the one that is not shelved where it would be expected to be). To further complicate matters, people will keep identifying new Durham Priory books.

Statistics aside, this raises a far more interesting question for the project – what is a Priory library book? On one level the answer to this has been simple: all books, manuscript and printed, are listed in Andrew Watson’s Supplement (1987) to Neil Ker’s Medieval libraries of Great Britain A list of surviving books (second edition 1964). The proportion of the Supplement taken up by Durham is impressive: 19 of the 74 pages listing books and 16 of the 39 pages naming donors. Those few of you who do not have your own copy immediately to hand can view the data online at http://mlgb3.bodleian.ox.ac.uk/ or restrict it to Durham Priory books alone.

There are a few problems with this list, though. Firstly, it has quite rigorous criteria for identification, some of which are not always appropriate and others which just do not cover the required scope. One means of identifying where a book was produced is the liturgical content, local saints and religious commemorated in calendars can indicate the location where it was written. This holds more weight early in the medieval period though, when fewer books were being produced by fewer scribes. Does the presence of local saints, priors and bishops of Durham in a 15th century manuscript make it a Durham Priory or just a Durham region book? BL Harley MS 1804 has these, but for it to be a Durham Priory book we also have to accept that a monk would own a book of hours, which seems less likely. My main problem with the list as it stands though is that it is too narrow. The most obvious example of this is that it omits DCL MS B.IV.46, a collection of 14/15th century catalogues of Durham Priory Library books which is packed with internal evidence of Durham Priory provenance.

There is a significant body of material omitted from MLGB3, particularly because it is classed as archival, so the project has included digitisation of most of the volumes produced by the monks, cartularies, registers and catalogues, as they represent a significant part of their scribal activity. A particular case in point is DCL MS C.IV.24 (in MLGB3) and the Priory Registers and DCD Locelli III.40 (which are not). DCL MS C.IV.24 includes a formulary of letters, the Priory Registers contain letters and Locelli III.40 is also a formulary of letters. MS C.IV.24, being stored with the rest of the book manuscripts in the Library, counts as a library book. We know from an entry in Priory Register II that in the early 15th century there was a shelf of books in the Chancery of the Prior of Durham which included C.IV.24 and the registers together. 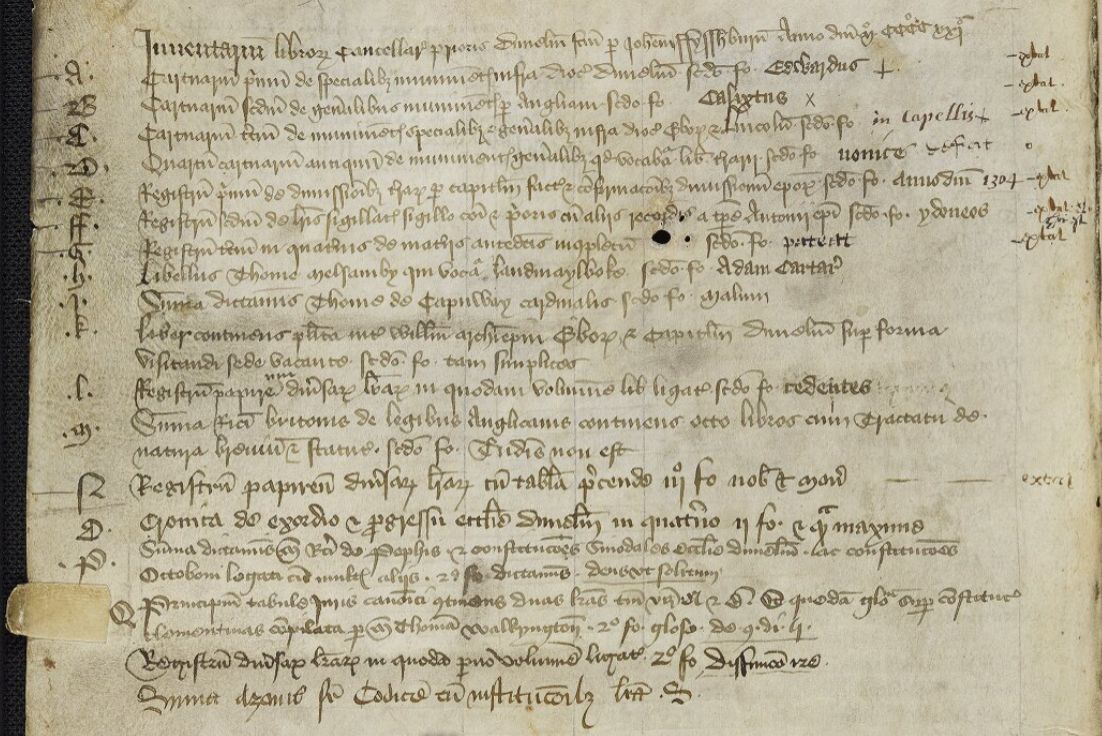 There is another interesting feature of Locelli III.40 that becomes obvious in the photograph below

It is not a book but a roll, a format extremely familiar to the monks of Durham but now less associated with libraries and more with archives (which is where this item now lives). It too has been digitised, and is a fortunate survival showing that the working library of a Durham monk was not just books on shelves.