The purpose of the project is to collect all information relating to the books of Durham Priory, manuscript and printed work inherited, given, bought or created by the monks of the Benedictine priory of Durham, its predecessors and cells.

The first phase of this work has started digitising material still in Durham, held by Durham Cathedral Library (341 manuscripts and 52 printed books) and Durham University Library (12 manuscripts and 2 printed books). There are also about 50 printed books in Ushaw College Library, a few miles from Durham city, which should be digitised later on in the project. The archives of Durham Priory also reflect the literate culture of the period, especially illustrative of scribal and organisational activity carrying on in the Priory throughout its existence, so manuscript volumes – cartularies and registers – and any records of library activity will also be digitised for the project.

Although a large number of books remain in Durham, some 175 manuscripts and 41 printed books with Durham connections have been identified in other libraries (almost entirely within the United Kingdom). It is hoped that these will become available online as well, enabling a virtual reunion of the surviving Durham books online. Some of these have already been digitised by their owners, and the project intends to assist wherever possible in increasing this number.

While Durham Priory has been extraordinarily lucky in the number of books that survive today, there were far more on its shelves, in the hands of its monks, or just around and about the buildings and precincts. Some would have been used to the point of disintegration, others lost or given away, or becoming obsolete and out of date their parchment would have been recycled for other less exalted purposes. After the dissolution it is clear that many books left the building – about half as many survive today beyond the walls of Durham Cathedral as in its own library. How many more left but did not survive to the present day? We have some clues, most importantly surviving medieval library catalogues, which not only serve to identify many of the survivors but also show us how many books have perished. Many more medical texts, for example, are catalogued than survive, showing that we cannot simply assess the nature of the Priory library from survivors.

Sadly, rich as the information is from these contemporary library catalogues, they are from the earlier period of the Priory, so we have no catalogue of printed books during the monastic period, although the evidence of the printed survivors is that this was a period of lively scholarly engagement. Right up until the dissolution, monks from Durham Priory were studying at their own establishment within Oxford University, Durham College, and clear evidence of this survives in the books with which they worked. 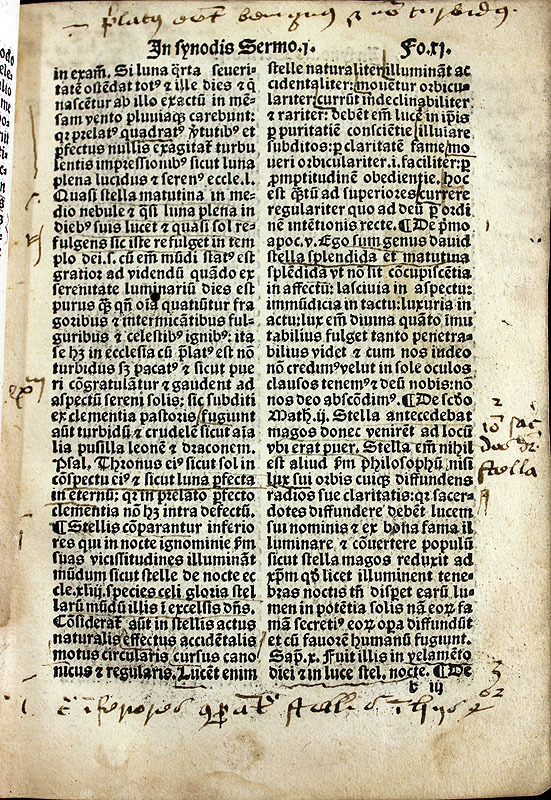