Whose book was it anyway?

I’m very lucky that I get to look at a huge number of really beautiful books from Durham and call it work. One of my favourites so far is this eleventh-century gradual. It’s not the most spectacular book I’ve worked with, but it’s pretty special nonetheless. Click through the images at that link and I hope you’d agree with me. 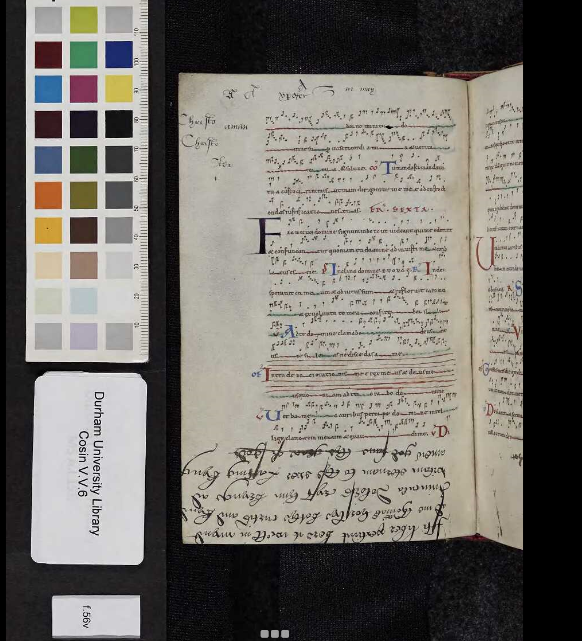 It survived from the eleventh century! That’s already pretty rare, especially for this sort of music book that was in use day to day. The script is this fantastic, clear handwriting that must have been very lovely to sing from if you were a monk here in the middle ages.

But then the Reformation hit and this book was picked out of the library shelves, probably by Thomas Horsley. He carried it off to Newcastle along with other Durham books and to make sure it was really his book, he wrote his name in it. I make it at least eight times that Thomas wrote his name in the margins. Even better, Roger Clarke also wrote that it was his book, amen.

There’s also a fab multi-lingual annotation by someone who just knows a few Latin phrases like ‘a vincula doloris (from the sad chains i.e. life)’ that tells us that Horsley was a kind man and that he has died:

Other people have added notes, tried out a phrase or two in the margins, drawn silly faces and best of all, accused their friends of being knaves. This book was well-used and loved by a whole series of people after Horsley, some of whom wrote their names in too. But then it came back to Durham when John Davenport bought it, just as he bought quite a lot of other manuscripts, and gave it to the library founded by his boss, John Cosin, bishop of Durham.

I want to know why Horsley took this book. Did he like the way it looked? Was there some reason why he particularly wanted to own a musical manuscript from Durham Priory? Who added the picture of a monk kneeling in prayer? Was it the same person who added comments about transubstantiation, whether or not Christ was really present in the bread and wine of the mass, one of the key theological points in the Reformation?  This book hints at so much about the Reformation in Durham and the surrounding area and the ways in which people were feeling their way through a very confusing time.